Here’s another reblog from my colleagues at the Book Review Directory! Enjoy! 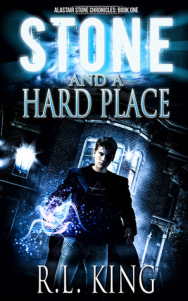 Stone and a Hard Place

It’s hard enough for Alastair Stone to keep his two lives—powerful mage and mundane Occult Studies professor—separate without an old friend asking him to take on a new apprentice. Especially after a university colleague wants him to investigate a massive old house for things that go bump in the night. Still, Stone figures it’s an easy job: just turn up, put on a little show, and announce that the house is clean.