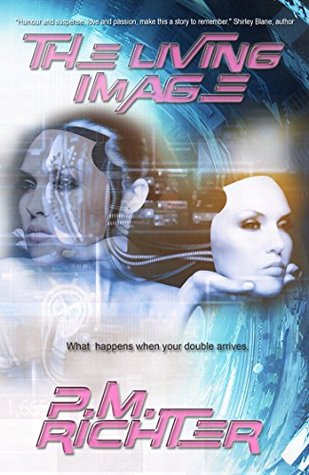 With my pantry set fit to explode despite my best efforts, the missive has come down from Starving Review LLC to get to eating double-time!  The first thing to pop out onto my plate is a trifecta of fusion, promising a pleasing blend of science fiction, mystery, and spy thriller.  Can The Living Image mirror the flavorful spices of its various genres or will it simply point out the flaws in the image?

Before we find out, let us read the Starving Review by-laws:

It took me a bit to really wrap my mouth around this particular cupcake.  What Image really is, at the heart of the recipe, is a bit of nostalgic kitsch, brimming with the over-the-top flavors of a 1960s spy adventure.  Think more Roger Moore Bond than Daniel Craig Bond here, or, in a less serious example, FX’s Archer.  The villains are slimy and despicable, the Cold War is so on even in an age of cellphones and glastnost, and the good guys are classy.  Once you tune your taste buds to that particular flavor profile, what seem like rough edges and inconsistencies in the plot and world history melt away.

The biggest strength of Image lies in its main characters.  There’s been a lot of care put into mixing the ingredients for them and cause you to be invested in their plight.  This is backed up be a nice, steady pace that keeps the plot rolling along in good measure.  Mixed with the flash and awe of that 60s spy thriller vibe, it makes for an excellent slice of cake to nibble on.  I know this may seem a bit brief in regards to this, but there’s no other way to put it.  When Image hums, it is a swinging jazz-disco number in the middle of a classy party.

On the other side of the plate, though, this isn’t a perfectly baked treat.  The flaw that I found most pervasive was the inconsistent dialogue.  At times, especially in the most serious character moments, the dialogue range true, but at other times it turned out flat and flavorless.  One pet peeve is that sometimes what I thought would be insightful exchanges were glossed over in the ‘X told Y this’ method.  Your dining experience may vary, though!  Outside of that, there are some minor flaws here and there, with the slightly flat climax being among them, but nothing that really takes away like the uneven dialogue.

To bring it all together, The Living Image is a slice of kitschy nostalgic 60s spy-thriller-sci-fi pie that is quite enjoyable!  If you like classic James Bond, the original Man from U.N.C.L.E., or anything in that range, you’ll enjoy this meal.  If you want a grounded, down-t0-earth spy experience, you may want to grab a different dish.