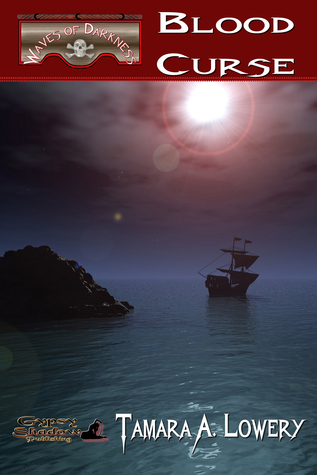 You know, for post-holiday literary cravings, one could do worse than pick up some fresh seafood. That being the case, that’s exactly what I did! Today’s literary meal is a spicy bit of historical fiction set during the Golden Age of Piracy. Magic, vampires, creatures, pirates, and rum are the promises of the day in Blood Curse so let’s hit the waves and see it the meal is as filling as it promises!

Before we tip back the rum barrel, let us swear our oaths to the rules of the Starving Review:

What’s up for offering certainly looks to be fulfilling. From the start, it is obvious that the chef put in her homework, studying the history of the region and the lore of piracy. There is some real effort put in to create a sense of reality to then lay the supernatural elements on top of like a spongy layer cake. This all helps to create that certain ‘lived-in’ feeling that good world-building engenders. What supernatural elements are introduced to this point show a good bit of internal consistency, so that’s bonus points there.

The seas remain smooth as we move onto the cast of characters. We have a good focus on fleshing out our anti-heroic protagonist and his innermost circle, while our assorted antagonists get thinner icing. Still, no characters go wafer-thin outside of throwaways. The only somewhat sour note is that some characters wind up having too much of the cake sliced for them. The tale is third person omniscient and there are moments where that viewpoint shifts through one-note characters, taking time away from the important characters or sometimes throwing the brakes on the pacing.

And that’s the only really uneven element of Blood Curse … the pacing. Overall, things run smoothly, especially in action and dramatic scenes. However, between the sometimes eccentric choices for PoV characters and drag points where we run into the rare but still worthy of noting Infodump about some supernatural or historical element, there are points of serious drag. It doesn’t ruin the meal, to be upfront about it, but it does lead to the occasional dull course and baffling ingredient choice.

The plot is solid, setting the stage for supernatural pirate adventures, creating a core metaplot for the entire series while still setting out a solid storyline for this first volume, concluding it nicely while setting sail for the next one. Again, the only plot flaw is in the pacing, a large portion of the meal is in the set-up of the whole overarching series, leaving the first actual adventure a bit fluffy. Again, nothing deal-breaking but worth noting. Still, one can make a solid argument that with the fluff out of the way in the first book, the rest of the series should be a laser-focused adventure fest.

To bring it all together, Blood Curse is a rousing meal of pirates, blood, and magic, with only a few sour notes! If you love historical fantasy or the whole pirate concept, I certainly suggest checking this out! If you’ve had your fill of supernatural stuff in general or don’t like historical fiction on the main, you might want to skip this particular meal.

FINAL VERDICT: **** (A rousing meal of pirates, blood, and magic, with only a few sour notes!)